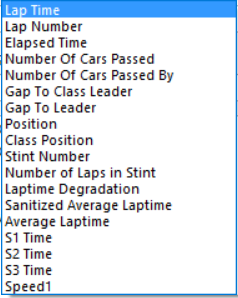 Filers can be added to the plot series to only look at ranges of interest. For example of you wanted to remove the In and Out laps from a lap time plot an upper limit can be applied via the Edit Series button in the ribbon control as shown below. 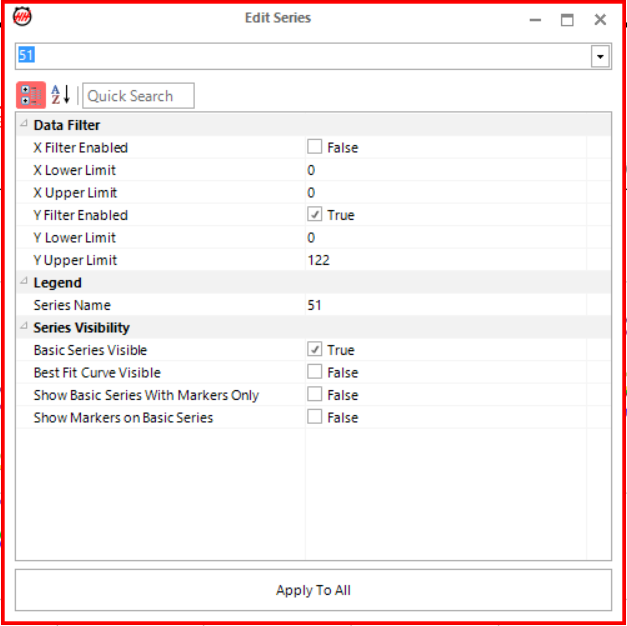 The raising average graph can be used to analyse practice/qualifying sessions or a race. The graph is a plot of the average best X laps for different values of X, starting from 1. In the example plot, for the lap number 60 the corresponding y-value shows the average lap time of the best 60 laps for each car. The raising average graph also gives an indication of the consistency of each car/driver. The shallower the slope the more consistent a car/driver is over the corresponding number of laps shown on the x-axis. The raising average plot is useful to see the overall performance of a car/driver in a session, but does not allow for analysis of individual stints or contiguous subsets of laps.

The gap chart is useful for analysing the pace of the reference car over periods of laps (e.g. stints and/or the whole race) relative to the other cars shown on plot. Because a number of laps are studied there is a filtering effect that gives a much clearer picture of the relative pace of the two cars compared with looking at raw lap time data.

There are 3 difference modes that can be used to set the reference as shown below.

The gap of every car relative to a chosen reference car at the end of each lap.

The gap of every car relative a lap time. This can be thought of as the gap to a hypothetical car that does the exact same lap time for the entire race.

A class is selected, the lap time of the current leader for that class is then set as the reference for the whole race.

Similar to the normal gap graph for a reference car with the addition of prediction until the end of the race. The actual gap to the car in question is shown up to the current point in the race which is denoted with the vertical red line. The assumed future pace for each car is the average of the best 3 laps in the last 5 laps. The pit stop sequence for the forward prediction can be based on the  Estimated Stint Lengths or Fixed Stint Lengths depending on what is appropriate.

In series where GPS data is available over the timing feed (such as WEC and Formula E) this data can be visualized in HH Timing. The speed traces and position on track (driving lines) of each car can be shown.

Note that this data is based on taking the derivative of position data which has two main sources of error:

These errors can be large enough that the data is of little use for determining speed. In order to determine the speed via GPS to a reasonable accuracy the speed signal from the GPS unit on the car must be used which is not given in the data feed.