Common Features of all Track Maps

Cars that the user wants to pay particular attention to (such as team cars) can be highlighted to make them easier to find on track.  Highlighting cars also allows ghosts to see where each car will come out on track relative to traffic after a pit stop and information about a wave by during a S/C period. Car #13 is highlighted in the example below which means it is coloured by its car colour and has an arrow following it. The car following settings are found in the backstage settings. 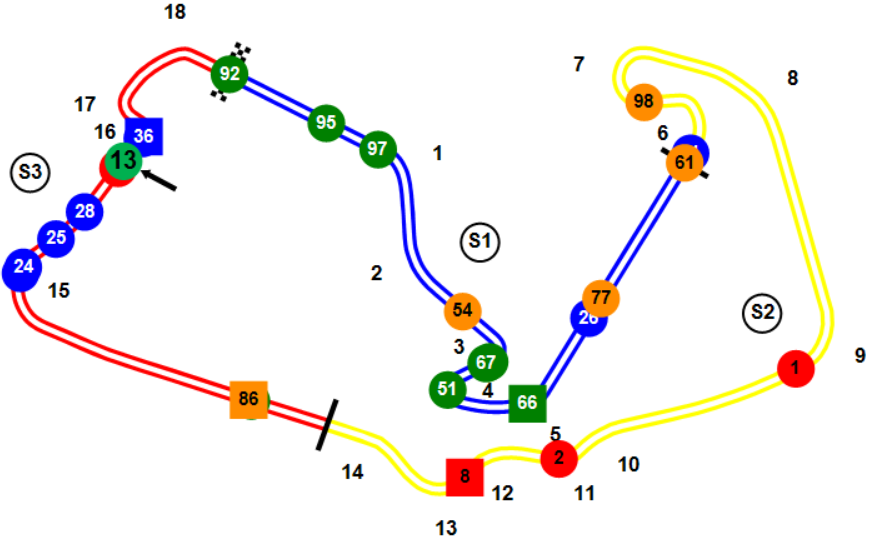 Cars in track maps are coloured by the class colour by default. Options for colouring cars on the track maps include:

Colouring cars by track tyre manufacturer can be helpful to make your cars stand out even more than using the car highlighting function in events with a large number of competitors such as VLN. Generally, by default cars are not assigned a tyre manufacturer (although this can be assigned manually in thecar options) this means all cars are shown in a single colour except for any cars set as being highlighted.

During caution periods where the track status is FCY or Safety Car the track maps will flash with yellow as shown below.

At the bottom of each track map a list of all the cars currently in pit lane is given.

At the bottom of each track map any cars being highlighted (usually team cars) that are eligible for a wave by will be denoted.